Life could not have been easy for my great-grandmother, Emily Pugh. She was only  53 years old when she died 20 January 1913 in Owen Sound. According to the obituary of "Mrs. Iles", after several years of illness, she died from dropsy, [1] now referred to as edema (the swelling of tissue due to excess water). According to her death registration, she had suffered from mitral stenosis for four years. [2] "The mitral valve separates the upper and lower chambers on the left side of the heart. Stenosis is a condition in which the valve does not open fully, restricting blood flow. Mitral stenosis is a disorder in which the mitral valve does not open fully."  Her dropsy would be one of the symptoms of the Mitral stenosis. Today, she may have been able to be helped. Had she ever had rheumatic fever or poorly treated strep throat or scarlet fever that might have resulted in her having this health problem? [1]

In Emily's obituary, it says the boys:  Harold, Albert and Emmanuel were living at home. It is interesting to note that the youngest, Lillian (Lily) who hadn't yet had her thirteenth birthday is listed as of Owen Sound. Had she gone to live with an older sister when her mother became very ill or was she still at home?[2]

The Salvation Army Ensign conducted the funeral services at their home on 9th Avenue East, at the Salvation Army Barracks on 3rd Avenue East near 10th Street and at Greenwood Cemetery where she was buried. [2] (lot 104 Range 6, North East Section) On her grave is the word "mother" on a flat marker. There is no other marker to show where she is buried. [3]

The Salvation Army Band, possibly led by her son William, bandmaster, accompanied the funeral cortege. The Salvation Army songsters were present at the graveyard service. Had they walked from the home down the hill to the barracks and then through the valley and up the "cemetery" hill to the cemetery (a distance of about 4 km or  2.5 mi if they took a direct route)? [4]

So what is known about Emily? She was born in July 1860 in the Maugersbury Workhouse, near Stow-on-the-Wold, Gloucestershire.  Her mother, Hannah Pugh and 11 year old sister, Mary Ann were living in the Workhouse. [5] Hannah saw to it that her daughter was baptized but no birth registration has been found.


Emily PUGH, baptised August 17th 1860, daughter of Hannah PUGH, in the Workhouse, parish of Donnington, by J.A.HILL, Chaplin of the Workhouse. [6]

No mention is given of her father's name. Was Hannah a single mother?

So let's go back before Emily's birth.

At the time of the 1851 census, Hannah Pugh and one year old Mary Ann are found with Hannah's father, a widower, Thomas Cowley, in the hamlet of Donnington, Gloucestershire. Hannah had also been born there.[9] Sometime, between 1851 and 1860 Hannah and daughter, Mary Ann moved to the Maugersbury Workhouse. [10] Did Thomas Cowley die? What happened to Charles Pugh?

When Emily was five years old, her mother, on 7 October 1865,  married William Clifford


How did Hannah Pugh meet William Clifford? This is not known for sure; however, the 1851 census, shows William Clifford at household #4 and Hannah and Mary Ann Pugh and Thomas Cowley at household #14 in the hamlet of Donnington. [13] They may have known each other before the death of William's wife.

In 1871, the census taker lists Emily as a Clifford. Living in the household are William, Hannah, Austin, 14, Emily, 11, and Sarah, 4. [14] Austin would be Emily's step-brother. Sarah would be Emily's half-sister.

Ten years later, Emily is shown on the 1881 census, still with her mother and stepfather but now in Broadwell. She is working as a servant. Her relationship to the head of household is given as grand-daughter.  She is not listed as Clifford but Pew (indexed as Rew). This piece of information was found in my early research and threw me off track for a while. What most interesting about this find was that George Illes [sic], a young agricultural labourer, was a visitor in the household. [15]

Several months later, Emily and George married  15 October 1881. At the time of her marriage, 22-year old Emily is listed as a spinster and that  she was unemployed. Her father, on her marriage registration is given as Charles Pugh deceased.

Throughout their married life they moved often. The census records and the places of birth of the children give some of the locations where they lived.

Emily had her last child, a baby girl, Lillian Ruth Iles on 5 March 1900 in Aston, Birmingham, Warwickshire. [25] Over a period of 17 years, Emily had eight children who all lived to adulthood.

They were enumerated in the 1901 census in Birmingham. This would be the last time they would appear on an English census. Emily still had most of her family at home from the little ones at home to William who was now working. [26]

Emily's eldest son, William George Iles married Emily Lily Dudley on 27 January 1903. [27] Emily's mother, Hannah died 7 March 1903 in Stow-on-the-Wold of bronchitis and cardiac failure at the age of 75 years.  [28] Emily became a grandmother the following year, when William and Lily had a daughter Edith May Iles on 28 May 1904. [29]

Emily, her children, daughter-in-law, Emily Lily, and her grand-daughter set sail on board The Quebec at Liverpool, England on 27 April 1905. They arrived in Montreal Quebec on the 7 May 1905. George is not listed in either the outbound or inbound passenger listings.  They were bound for Owen Sound. [30] If the 1911 census of Ontario is correct, George may have come out to Canada in 1903.

Was life better for the family in Canada? 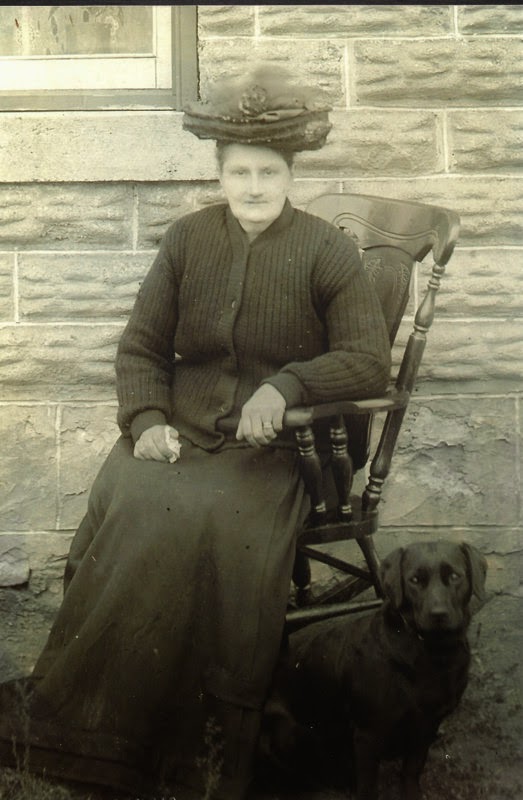 update to posting: on the 25th of March 2014, a first cousin gave me a picture that has been identified as Emily Iles nee Pugh. At last, I can see what she looked like.