Books and Articles by Janet Iles 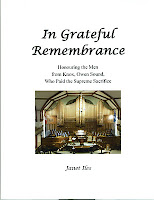 In Grateful Remembrance: Honouring the Men from Knox, Owen Sound, who Paid the Supreme Sacrifice

The book focuses on the men and their families but it also includes some church history and information about the church organ that was dedicated in memory of the soldiers who died during the First World War.

To see a list of the men that I researched, read my article In Grateful Remembrance

Articles (On-line not on my blogs)

People's Cemetery (GYRabbit Online Journal) August 26, 2010 [some of the links no longer work as the Cemetery website has changed]

Paying Homage to the Those Who Came Before US (GYR Rabbit Online Journal) August 25, 2011