Elizabeth Fields Love (nee Robinson) would be my great-grandmother. I salute her as part of the Carnival of Genealogy to honour women during Women's History Month.

I never knew her but she was a special person in my mother's life as she lived across the lane from her. I am fortunate to have photos of my great-grandmother Love as I have some of her daughter Margaret's photos. So what have I learned about her from my research? 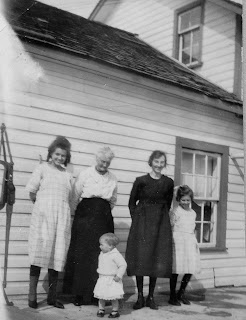 I have been unable to find Elizabeth with parents in census records until 1871 when the family is in Collingwood Township, Grey County, Ontario. My mother told me that her grandmother had lived on Collingwood on the Mountain. (This was to differentiate between the town of Collingwood in Simcoe County.) Elizabeth had two older brothers, Joseph and William, who were born in England. She had four younger sisters: Sarah Jane, Isabella "Belle" and Eliza Ann and Mary Ann. She had one younger brother, Robert.


Sometime during the 1870s, the family moved to Manitoulin Island and there Elizabeth met James Love. James had come to Manitoulin Island, it is said, in September 1870 with this brothers, Thomas and Robert and his half-brother, William Vincer to work in the lumber camps at Michael's Bay. The brothers bought farmland on Lake Mindemoya. His brother, Robert drowned when the boat he was travelling went down, when he was on his way back to Southern Ontario to get his mother and step-father.

James settled on the farm in 1872. On 14 November 1876, James and Elizabeth Fields were married by Methodist minister, William Hall. James' brother Thomas and his half-sister Agnes were their witnesses.

The couple had, it is believed, ten children but not all children survived. One side of the monument in the Mindemoya cemetery lists the children who died young. It is hard to read. My mom thought there might have been errors when the stone was re-carved. The first child, Jane was born 19 March 1879 and died 28 March 1879. [dates not certain.] Next was Agnes Hamilton Love named for her grandmother. I have found a birth registration for her that was registered 3 March 1880 giving her date of birth as 3 October 1879. There is something wrong with the dates for these two babies. Neither of them appear on the 1881 census.

Cora Ida Love was born 30 March 1881. She lived to the age of 91 and outlived two husbands. Norman Luther Love was born 23 June 1883. He also died young. No death registration has been found for him.  John Thomas Love, who became my grandfather, was born 25 August 1884. He married my grandmother, Janet Gertrude Johnston 11 May 1909. They would raise their family on the family farm across the lane from his parents. 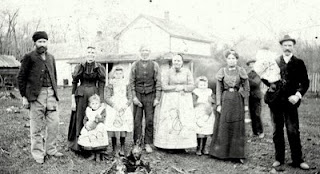 It must have been difficult for Elizabeth and James to lose some children so young. My grandfather, John Thomas Love, was their only son to survive to adulthood.

Elizabeth and James and the family attended the Presbyterian Church in Mindemoya. The family was very involved with the church as James served as Sunday School superintendent for over twenty years and prayer meetings were held in their home. James and Ellizabeth Love 29 June 1914
Tragedy struck the family on 21 August 1914. It was early morning, about 8 a.m. and James was already at work in the barn unloading oats. Newspaper reports provide some details of what happened. James was unloading the oats and he was standing on a beam at the top of the barn operating part of the uploaders, when the rope gave way and the heavy load suddenly drew the machine back. It caught him in the side and it threw him with great force through the side of the barn. He landed face down at least ten feet from the barn. My aunt Bessie (Agnes Elizabeth) told me that although she was only four years old at the time, she remembers hearing the ringing of the bell that normally called the farm workers and family to meals. This alerted the family that something was wrong.


James remained unconscious and died near noon. His death registration lists the cause of death as shock due to the fall. Dr. R. W. Davis attended.
Now Elizabeth was a widow at the age of 55. Her daughters Margaret and Grace were unmarried. She was fortunate to have her son, John living across the lane.

I am sure she saw many happy times in her life. She was able to travel to southern Ontario to attend Robinson family reunions in Mitchell.

Margaret remained at home until her mother's death to care for her. Elizabeth died 16 16 May 1932.

Margaret and Elizabeth Love 1931 in Markdale.