Swimsuit Edition of the Carnival of Genealogy - Bathing Beauties?

1985 turned out to be an interesting year, not all positive, but my parents and I began it off right with a two week holiday in Cuba early in January. We stayed at Villas Cuba near Varadero. Once part of the Dupont Estate, there was a small hotel section but it consisted mainly of Villas.

Back in 1985, many of the accommodations in Cuba often required sharing washroom facilities with others unless you paid extra to not share. We were in luck. My parents specified that they wanted private bath and so did I.  Our villa had three bedrooms but because of our request one bedroom remained unused. Our villa also had a maid's quarters. Our maid did not stay over but used it to change in to her uniform. She was great. 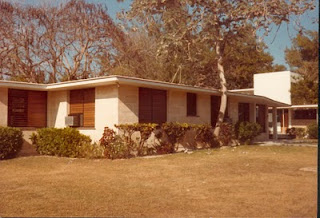 Our villa across from the office area and restaurant.
We had beautiful areas in front and behind our building to sit and read when we were not on the beautiful sandy beach. 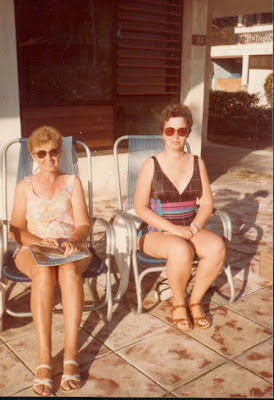 My mother and I in front of the villa. Mom is writing in her travel journal. 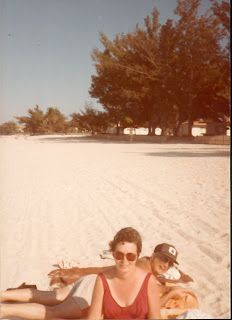 My dad and I on the beach.
Notice the beautiful sandy beach. It was the closest to the feel of Sauble Beach sand that we ever saw during our travels. I note on the back of the photo that you can't see my Spanish text book. I was studying while I was there, as I was taking a university course in Spanish that year.

There are no photos in my album of us in the water. Were we bathing beauties?