Spanish Flu Did it affect my ancestors?- Carnival of Genealogy

The theme for this Carnival of Genealogy is Disasters. How did it affect our ancestors?

I really do not know if any specific disaster directly affected any of my ancestors. No family stories have been passed down.

So I got to thinking. With all the recent talk about the H1N1 flu, it got me to thinking about the Spanish Flu of 1918.

The Great War was drawing near its end when the Spanish flu struck people around the world. Amid newspaper reports of injuries and deaths of local men in battles, appeared notices of casualties of a different kind -- those stricken with the Spanish Flu.

I turned to two local newspapers The Advertiser and The Sun to see what was being reported. It made for some interesting reading.

On October 10, the Acting Medical Officer of Health, Dr. A. B. Rutherford said that there were about 30 cases in town but none of them serious but one should not take chances with it.
"if you catch cold and feel any of the symptoms, such as fever and pain in the joints or limbs; got to bed at once, keep warm, and send for the doctor." [1] There were no plans to close the schools at that point.

On October 11, a headline read "Need help in caring for the 'flu' patients. All local nurses were already busy and an appeal was made to the women of the town to "give a helping hand". [2]

A week later, The Sun reported that while there were many Spanish flu victims, the local outbreak, according to the MOH, was not serious enough to require the schools to be closed. [3] Well, the schools ended up being closed as well as other institutions, such as churches and the library. [4] School teachers and others volunteered to look after the sick and to work in the diet kitchen. The diet kitchen prepared light nutritious meals for the sick who were unable to prepare food in their homes. In some families all were stricken. [5] 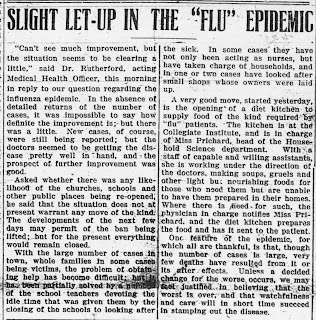 Churches re-opened on 10 November with schools opening the following day.
The epidemic wasn't over. It lasted until the spring of 1919 and returned again in the fall of 1919. World wide it is reported that more people were killed by the Spanish flu than during the War.

In 1918, my grandfather William Iles was still overseas; my dad was just a toddler; his five older siblings ranged in age from 5 to 14.

I have lots of questions. Did any of the Iles and related households get sick with the Spanish flu? I know that there were no deaths. Did any of my great aunts answer the call for volunteers to help out? I am sure my grandmother would have had her hands full just looking after her own children. But did she help others? The older children would be home from school when it was closed. Routines would be different when the churches were closed. Lots of questions but no answers.