They worked hard for their money - Smile for the Camera 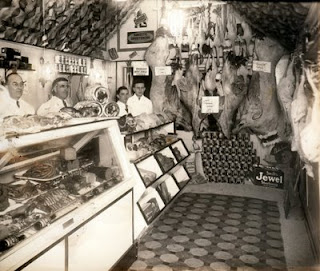 Photo taken in 1937 at Turner's Meat Market in Owen Sound on 2nd Avenue East
In the photo are Charlie Boorman, Roy Turner, Bob Iles and Gord Waghorn. My father was 21 in this photo. Original in the possesion of Janet Iles.

In 1934, Turner Brothers who were cattle drovers opened a meat store. Charlie Boorman had already agreed to be manager and they asked my dad to go also. Both had been working at Dominion. At first, my dad did everything, including some delivering. His duties included ordering, cutting meat, making sausage, cleaning fowl and counter selling.

What he liked doing was Friday afternoon dressing the window in large marble slab and hanging quarters of beef, lambs, and turkeys on the rail for backstop. Roy Turner, Charles Boorman, Gordon Waghorn, Bill McDonough, his brothers Wilf and Cliff, Mark Nicholson and others worked at Turners. They were paid about $12.00 a week.

My dad left Turner's Meat Market when he joined the Perth Regiment in September 1939 where pay was $10.00 a day with room and board.

The above information was found on a piece of paper found amongst the photographs.

Update: The Turners were Roy and William and the market according to the city directories was called Turner Brothers.
Posted by Janet Iles at 8:50 AM