With two carnivals with due dates close to each other talking about summer vacations, I will focus this posting for the Canadian Carnival of Genealogy on vacations at Manitoulin Island and the other will be about vacations at Sauble Beach.

I can recall that the trip to Tobermory from Owen Sound was an adventure. To catch the 7 o'clock ferry meant an early departure time from home. The children would leave home in our pajamas. My dad rigged up "a bed" in the back seat with crates and likely blankets to make it like a "double" bed. This, of course, was before the days of seat belts.

The roads were quite windy in the early years with lots of twists and turns through forested areas. As we got closer to Tobermory, my parents would be hoping that we would get in the line for the ferry with enough time to get us in to our clothes before it was time to load the boat. As I remember it, you had to be there before 6 a.m. to keep your guarantee of a reservation.

The next part of the adventure was the crossing on the ferry. Passengers walked up the stairs, while the drivers drove the vehicles on. During the years we travelled back and forth as a family, there were several that travelled this route -- the Normac, Norgoma and Norisle. Most of our trips were on the Norisle. When these ferries were retired, the Chi-cheemaun became a faster way to travel between the mainland and the island.

The Norisle had state rooms. We often booked one. Once my sister and I went up with our great aunt Grace and her husband to attend a cousin's wedding. We went up the night before the sailing and slept on the boat overnight. That was fun!

Sometimes the waters of Lake Huron were rough. The trip was longer than it is now.

We were almost there. We travelled the windy roads to Mindemoya. Now my memory is foggy on where we stayed each time we went. I recall most often staying with my Aunt Winnie, but a visit there would include time spent with my grandparents while they were still living and at my Uncle Ross' farm. I have lots of cousins who are around our age. 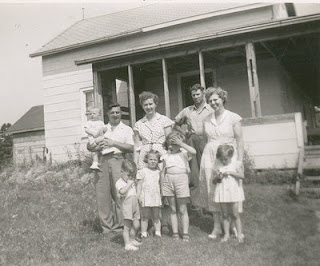 The Iles and Cox families at the Cox farm. Of all the children only my brother Ted and I are facing the camera.
L to R in back Ted Iles in the arms of Bob Iles, Marion Iles, Art Cox and Winnie Cox
front row Tom Cox, Janet Iles, Nancy Iles and Valerie Cox. 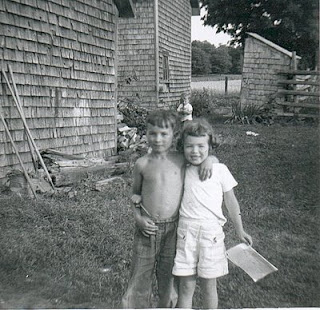 It has been 13 years since I last visited the Manitoulin Island. I wonder what changes I would find if I returned to visit?
Posted by Janet Iles at 6:06 PM