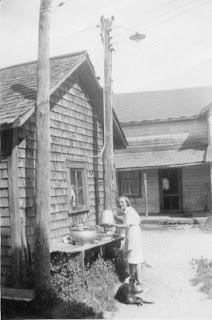 On Mother's Day 2009, I salute my maternal grandmother - Janet Love nee Johnston. I couldn't find a photo of myself with my grandmother in my collection but I will continue to look for some.

I was only eight years old, when my grandmother died. Because she lived on the Manitoulin Island, I did not see her often. I do remember that she worked hard. In the photo above taken in 1943 (before my time), she is shown cleaning the milk separator. I do remember her doing that chore. In latter years, she was very stooped over. During her life, she never had an electric refrigerator. I can picture her running around to the side of the house to go to the basement to get things that had been put in the cold cellar to cool. Electricity came first to the barn. I can't recall if they had indoor plumping during her lifetime. I do not remember staying at my grandparent's place when we went to visit. [Maybe my brother and sister have better memories than I.]
Janet (for whom I am named) was born 1 May 1883 in Sandfield Township, Manitoulin Island, Ontario. Her parents were Josiah Hemingway Johnston and Agnes Chambers. She was the middle child with four siblings older than her and four younger than her.
Mindemoya 1909


At the home of Mr. and Mrs. J [Josiah] Johnston of Silver Bay on Friday of last week was the scene of a very pretty event when their daughter Gertrude was married to Mr. John Love of this place. Both the bride and groom are well known and highly respected throughout the Island. Mr. Guss Johnston , brother of the bride, acted as groomsman, while the bride was ably supported by Miss Laura Love, sister of the room. Mr. and Mrs. Love entertained the young folks at their home on Friday evening, and all join in wishing the couple a long and peaceful life.

Her wedding picture with the Johnston and Love families is in this posting.


Janet who often went by Gertrude or Gertie moved to the Love family farm near Mindemoya where she and Thomas raised five children. My mother in a journal wrote: "I remember my mother as always rushing around doing things & waiting on us." Isn't it interesting that is my picture of her too? 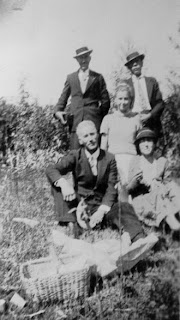 It certainly wasn't all work as shown in this photo taken in 1937. The family is on a picnic at Wikwemikong. In the photo at the back are my uncle Ross, my mother, Marion and Joe Escarobi (no relation). In front are my grandfather - John Thomas Love and my grandmother - Janet Love.
To see a photo of my grandmother as a young woman see this posting.
This article was written for the 72nd Carnival of Genealogy.
Posted by Janet Iles at 4:53 PM