For this Carnival of Genealogy-- Tribute to Women, I salute my great aunt Margaret. 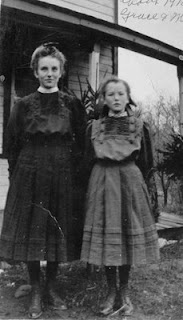 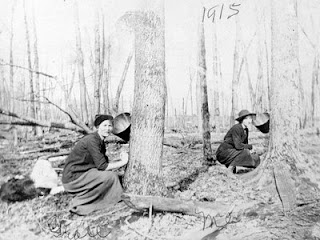 Grace and Margaret Love in the sugar bush in 1915.

My great aunt Margaret was a special person in our family. My mother spent her early years living across the farm lane from her aunt. 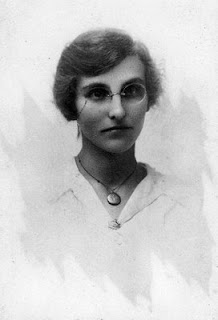 Margaret Love in Mitchell in 1918.

Margaret Isabelle Love was born on 14 January 1896 in Carnarvon Township, Manitoulin Island to James Love and Elizabeth Fields Robinson. She was the ninth child and second youngest in the family.
Margaret never married. After the tragic death of her father in a farm accident in 1914, she remained at home to help and eventually care for her mother. Her mother died in 1932.
Margaret left the Manitoulin to work. She cared for elderly people for a number of years. Eventually, she was hired by a gentleman in Toronto to keep house and to look after the children. She lived with them until her retirement. 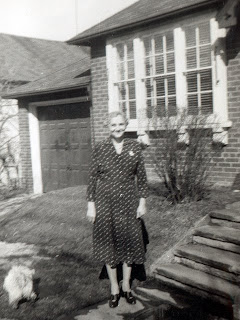 Margaret Love in front of the Palmer resident in Toronto in 1957.

She often came to our house for Christmas or to visit when she had holidays. 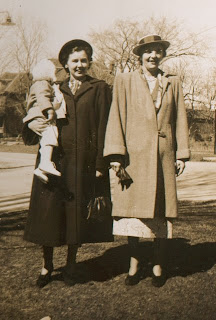 My mother, Marion Iles with possibly my sister Nancy in her arms and my great aunt Margaret (about 1948?)
Margaret was also very interested in family history. In a small notebook, she wrote out the Love family genealogy. When I got it, I found that it helped to chart out the names into families to sort out the names she was talking about.
She loved to take photographs. I understand she developed her own pictures. I can remember her lining us up for photos with her Brownie camera. I am thankful to have some of her photos that I have been sharing from time to time.
Margaret returned to Manitoulin for her later years of life. For a time, she lived with her oldest living sibling, Cora. When I taught for a year in Northern Ontario and lived on St. Joseph's Island, I had more chances to visit them. Often she would tell stories about the people she cared for. I wished I had asked her questions about her parents and grandparents.
Margaret died 14 March 1979 in Little Current, Ontario.
Margaret had been a wonderful woman and loved by everyone who knew her.

Because my maternal grandparents both died when I was young, Margaret was my link to their generation.
Posted by Janet Iles at 3:25 PM