David came to Canada from Annan Scotland with his parents and siblings in 1833. They lived in Richmond Hill for a year and a half. [7] It is not known whether, David moved with his family to Scott Township or remained behind in York County.

David was married 26 February 1840 to Hannah Hemingway, daughter of Josiah Hemingway and Anna Stiver. Rev. James George (Presbyterian minister) of Scarborough, Ontario performed the wedding ceremony that united Hannah and David. Gilbert Barker and James Lawrie acted as witnesses. [8] At the time of his death, David had property at Lot 13 Concession 5 Markham Township. [9]

David was a shoemaker as had been his father in Scotland. Had he learned his trade from his father? David had a thriving boot and shoe repair business. In the 1851 census it indicates that David had a store on his property. [10] In Lovell's Canadian Dominion Directory of 1870-1 David Johnson, shoemaker is listed.[11] Unionville had a population of about 250 at that time. In the Mercantile Agency Reference Book (and Key) containing Ratings of the Merchants, Manufacturers and traders generally through the Dominion of Canada, March 1883, David is listed as having a pecuniary strength estimated at less that $500, with no credit rating given. [12]

David and family were Methodists. The specific variety would change but most likely this reflected the union of the various Methodist denominations in the 1800s in Canada. In 1851, David was Episcopal Methodist. In 1861 and 1871, he was Wesleyan Methodist. By 1881, he was Canada Methodist. Central United Church, Unionville had its beginning as a Methodist Church in 1840. The sanctuary goes back to 1879, so the Johnstons would have attended services there. [13]

After the death of Hannah, David may have lived for some time with his daughter Maria, son-in-law Wilfred Frisby and grandson Cleaver.[14]

His obituary appeared on 10 November 1892 in the Markham newspaper and it states:
David Johnston is buried in Hagerman cemetery on the east side of Kennedy Road, south of Unionville, Ontario. 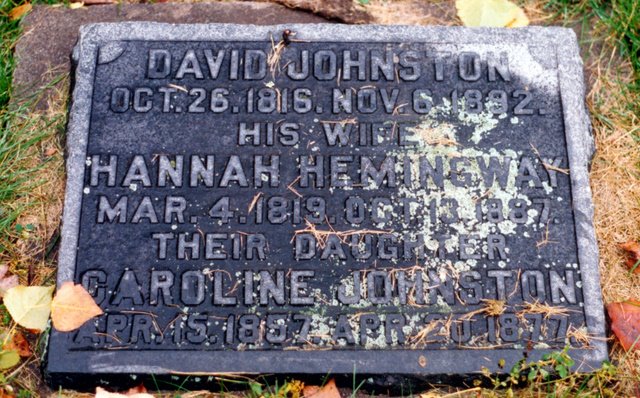 William Stiver (teacher) and Hannah Maria Frisby were the executors for David’s will. In his will, David left all the real and personal estate to his daughter Hannah Maria, who was the wife of Wilfred Frisby of the said village of Unionville. At the time of his death, David had real estate on part of Lot 13, Concession 5 in the Township of Markham and it was valued at $200. His household goods and furniture were valued at $50 and he had $45 in the bank.[16]