Whether Canadian fashion differs from American fashion or that of other areas I do not know. I am sure before the days of television and popular fashion magazines, Canadian fashion likely lagged behind some other countries.  I suspect that those living in rural communities didn't keep up with the current fashions as they needed more practical clothing, but I have no evidence to support this.

In most of Canada, we have four distinct seasons where the changes in weather gives rise to at least warm and cold weather appropriate clothing.

I have never been one to have any of the extremes in clothing. I wore short skirts but never the extreme mini skirts. When I look at photographs of my early days working in the children's section of the library, I was of course, much younger; my skirts were short. This made it challenging to retrieve books off the top or bottom shelves. I was happy when the hemlines went below the knees.

When I was little my mother made many of my dresses.  My mother did smocking. Did your mother?  My sister and I had some very pretty dresses. I once tried a modified form of smocking. 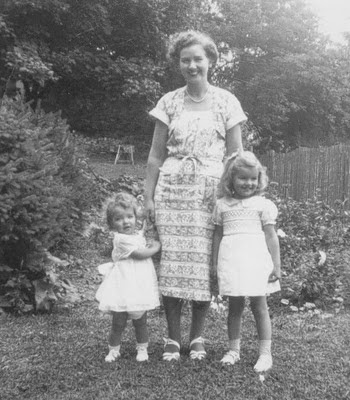 My mom (Marion), me (Janet) and my sister (Nancy) in 1951.
I am fortunate to have photos of my mother as a young woman. She was a smart dresser. Her are some examples. 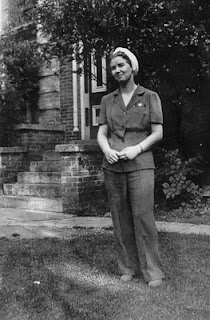 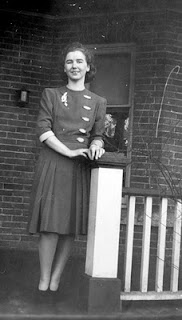 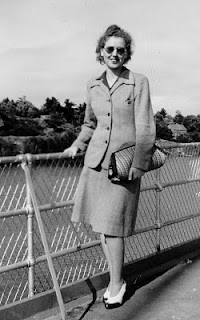 Photos were taken between 1941 and 1945. Note the contrast in shoes -- granny shoes and spectator pumps. I am not sure the name of the boat she is travelling on. Is she headed to Manitoulin or returning to Tobermory? The second photo was taken in front of Artistic Ladies Wear in Owen Sound.