Music is the way our memories sing to us across time. 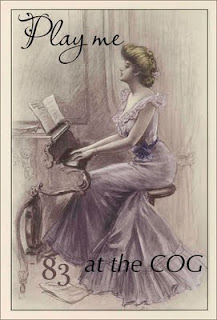 Thanks to the footnoteMaven for this attractive poster.

Welcome to the 83rd Carnival of Genealogy. Thank you to everyone who participated.

Nature or nurture? Do you inherit the musical gene so that you are inclined to be a singer or play one or more musical instruments? Perhaps, these postings will help you to answer these questions.

Evelyn Yvonne Theriault presents A Picture Can Lie! posted at A Canadian Family, saying, "To my working class family, playing an instrument was something for the "higher" classes."

Denise Olson presents Chopsticks & Moonlight Sonata posted at Moultrie Creek, saying, "No amount of music lessons or bribery was going to turn me into a musician."

Bill West presents West in New England: 49 Genealogical Uses for Flutaphones: The Complete List! posted at West in New England, saying, "I am not musically gifted so I fell back on a running joke about myself and flutaphones to come up with a post for this edition of the COG!"

Charles Hansen presents Musical Instruments for COG posted at Mikkel's Hus, saying, "While I was not a great musician, I found out I was even worse as a band director."

Brett Payne presents Whistling Bird, the Arizona Cowboy and the Disappearing Lady posted at Photo-Sleuth, saying, "Very few of my family members have progressed much beyond the recorder in their early grades. However, my great-grandfather Charles Vincent Payne (1868-1941) did have something of a reputation for his singing voice, honed in travelling vaudeville."

Dorene Paul presents Steen and Doris Parker: They Liked to Sing and Play posted at Graveyard Rabbit of Sandusky Bay, saying, "My grandfather liked to play the piano, and my grandmother enjoyed singing. I only wish I could have heard them! Both passed away before I was born."

Jessica Oswalt presents Music in the Family ... posted at Jessica's Genejournal, saying, "A brief overview of family members and ancestors who were either musically inclined or were involved in music."

Greta Koehl presents Musical Instruments – More on the Fiddling Moores posted at Greta's Genealogy Bog, saying, "When I first learned of the subject of this COG, my heart sank. It's a subject dear to my heart, but I though I had covered it pretty completely in two previous articles on my family's love for fiddles and my Uncle Howard, the violin maker. After rummaging through my mother's old keepsakes, however, I found two articles on Uncle Howard that brought back a long dormant memory - of my Uncle Howard's old Violano Virtuoso."

Mary Beaulieu presents The Gift of Music posted at AncestorTracking, saying, "Memories of a beloved teacher and a remote father's legacy."


Tracy presents COG 83: Tone Deaf in a Family of Musicians posted at The Pieces of My Past, saying, "I am woefully challenged musically speaking, but am descended from a lot of musical talent."

Sheri Fenley presents My Musical Family - 83rd COG posted at The Educated Genealogist. GrannyPam has identified the instrument in the photo as a banjolele.

Lorine McGinnis Schulze presents Oompah, Oompah, Oom pah pah.... posted at Olive Tree Genealogy Blog, saying, "Who in my ancestral past had the DNA with the Music Gene?"

Travis LeMaster presents Sam the Music Man posted at TJLGenes : Preserving Our Family History, saying, "Information about Samuel Lambertson and his banjo, including a photograph."

Carol presents Carnival of Genealogy, 82nd Edition—Musical Instruments posted at Reflections From the Fence, saying, "We have quite a few musicians, even have 4 generations in a row that have played. The last generation are highlighted by photos, our pride and joy!"

John Newmark presents Carnival of Genealogy: Musical Instruments posted at Transylvanian Dutch, saying, "Past research has indicated I may have some musical heritage, though it's not certain. I did have some music lessons as a child, though."

Lori Thornton presents Music, Music, Music posted at Smoky Mountain Family Historian. Lori tells us about the different instruments that she plays. She also says that the voice is an instrument.


Jasia presents The Magic in Grandma's Parlor posted at Creative Gene, saying, "Here's the story of my discovery of a magical musical instrument and what it has meant to our family."

Miriam Robbins Midkiff presents AnceStories: The Stories of My Ancestors: Eight Musical Things about Me posted at AnceStories: The Stories of My Ancestors, saying, "I'm reviving a meme I wrote nearly a year ago when I shared eight things about myself...I chose to write about eight musical instruments I either mastered or attempted. What's ironic is that I no longer am involved in any musical groups, either vocal or instrumental. Maybe someday...when I'm not so busy!"

Apple presents Musical Memories posted at Apple's Tree, saying, "The history of musical instruments in my family doesn't extend back very far so the recent generations are making up for lost time."

Valerie C. presents Begin with 'Craft': More Music in the Family posted at Begin with 'Craft', saying, "Musical talent ran in my maternal family line - including my GG-Aunt Ethel & her recording artist husband."

I do not know if this was a first posting for anyone else but I extend a warm welcome to Alice and Gayle  on their first postings to a Carnival of Genealogy.

Gayle Gresham presents The Christison Musicians posted at Colorado Reflections, saying, "Prospecting is in my Christison blood, but there is another talent that runs through the Christison family – musical ability. It seems that those who weren’t bitten by the gold bug honed their musical talent. And, in two cases, without music (and the U.S. Air Force) two marriages may never have happened."

Susan's posting shares the importance of music to her family during a difficult time. Thank you for sharing.

Susan A. Kitchens presents One month ago: Hootenanny in the Hospital posted at Family Oral History Using Digital Tools [News], saying, "This post is about a guitar. And singing. But it's also a post about why I have not been doing much blogging of late. Thank you so much for this theme, at this time-- it's the PERFECT way for me to segue from a looooooong bout of non-posting to posting again. With just the right touch. Oh, and there are links at the end of the story to two other stories about music and family. The This Land is Your Land link is about a banjo. And music. And family."

This is the end of the interesting articles about Musical Instruments and your family for the 83rd Carnival of Genealogy. I am sure you will enjoy reading them. I did. Thank you Jasia for giving me the opportunity to host this Carnival.


The COG has been published twice a month for over three years now, 83 editions thus far! It's covered a wide variety of topics and introduced many, many new bloggers and even a new carnival. Here's an opportunity to look back and reflect on when you first discovered the COG and when you first participated in it.

Share your COG experience with us and please indicate the number of COG editions you've participated in at the end of your article.

The deadline for submissions is November 15th and the next edition (#84) will return home to Jasia's Creative Gene blog.

Submit your blog article to the next edition of carnival of genealogy using our carnival submission form. Past posts and future hosts can be found on our blog carnival index page.