Fourteen years have passed since the last Iles family reunion. The last was in the summer of 1995. My sister and I attended with our  mother. It was held in Kolapore at what was at that time the home of my 1st cousin once removed, Mark Royall.

Kolapore, Church of the Nazarene.

You may notice that this is the Church of the Nazarene as well. The original church building has been converted to be the manse and a new church building added to the rear.

It was a beautiful day and most of the afternoon was spent outdoors. 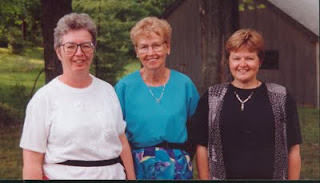 Originally, the family reunions were called for the descendants of George Iles. With time, the older generations have passed away and the younger generations are more geographically widespread apart. I also think it needs a group who want to organize an event. Now it seems that the only time some of the family gets together is at funerals, an occasional wedding or a special birthday.

Venues of other family reunions were Park Head, Oliphant, Sauble Beach and Owen Sound. Activities included games, visiting and eating. Sometimes the meals were catered so that no one in the family would have to spend time in the kitchen. 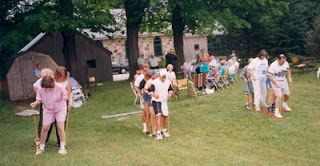 The highlight of those gatherings was for me, besides seeing everyone, was enjoying the music of the Iles family band that played for many of the reunions over the years. Sometimes, the family members who played mostly brass instruments, played for those who had gathered but on several occasions, they gave concerts for the public. They did a good job, as most only played together, during the quick rehearsal and concert each year.