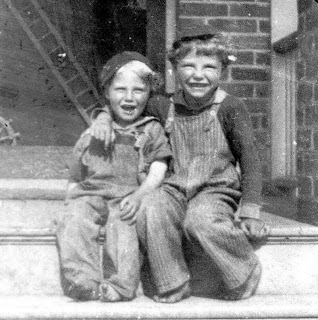 I love this photo of two of my father's younger brothers. What happy faces! Don't they look like that they would like to get into mischief? Cliff is two years older than Manny as he was called by the family. Later in business, he would either go by E.K. or Kenneth. Note that neither are wearing shoes.

Work took Manny to western Canada but he returned to this area for the latter years of his work in the banking industry. Manny died at the age of 60.

I worked with Cliff in the produce department when I was a teenager. We always had lots of fun.