Snow in a snow belt region of Ontario

Snow blankets this area generally from November to March with an occasional snowfall in October and April. If we are lucky, the snow that falls in November does not stay too long. Yes, we sometimes have extreme snowfalls that cause problems but it is the regular "Lake effect snowfall" that we are most accustomed to in this region.
Here are some photos of snow from this area. 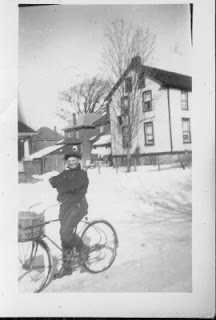 My uncle Bill Iles, sometime perhaps in the 1930s or 1940s. He is delivering groceries for Mel McKay who had a corner grocery store. It was from Mel McKay that my dad purchased his first grocery store. (photo undated) 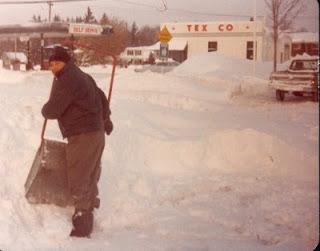 This photo is also undated. My dad is clearing snow. It would appear that he is clearing the road as it doesn't look like the truck across the street is far away. This is a main road that leaves the city to the west. I am guessing this photo was from the 1960s or 1970s. 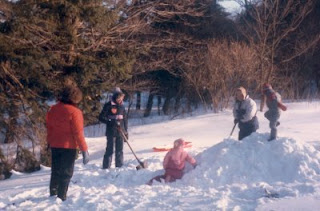 This photo was taken in 1987 at Harrison Park. It is a winter fun day for the church. 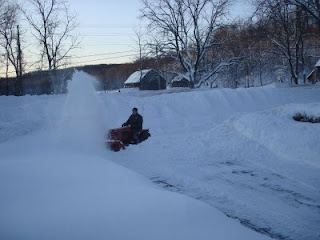 This photo was taken one morning just before Christmas 2008 when my neighbour was blowing out the end of my drive way. The driveway had been cleared the night before and the snow plow left a pile of snow at the end too deep to drive through. I think this is going to turn out to be an expensive winter for snow clearing for everyone.
Although snow can make pretty photos, I am not fond of a long winter. I do not like driving in it, nor do I enjoy cleaning off the car.
Posted by Janet Iles at 9:06 AM