My most famous Canadian relative

If, all my information is correct, my most famous relative would be Billy Bishop, World War I flying ace. Before I say anything about him, I will first relate what information I have that is pointing to him as being a relative. Our common ancestor would be John Nicholas Stiver [Stoeber] and it is believed that we are both descendants of two of the daughters of John and his wife Anna.


I would be a descendant of their daughter Anna Stiver who married Josiah Hemingway. Unfortunately, I have not found a marriage record of this marriage which took place about 1800 but several sources connect the Hemingway and Stiver families.


Billy Bishop is considered a descendant of Mary Ann Stiver who married Johann Englehardt Helmke. It is believed that they married in the United States in 1793 while the group of Germanic folk travelling with William Berczy were living there. Johann Englehardt Helmke is listed with only a son on the passenger list of the Brigantine Catherine that left Hamburg and arrived 3 August 1792 in the United States.


When Johan E. Helmke died on 8 November 1835, he was buried in the St. John's Lutheran Cemetery in Buttonville, Ontario. Whereas when Mary Ann died on the 26 February 1855, she was buried in the Bethesda Lutheran Cemetery in Markham, Ontario amongst the other Stiver tombstones. Some of the early research on the family said that Mary Ann had been a Quantz but it is now felt that Johann's first wife may have been a Quantz

[If anyone reading this has documented evidence to support or disprove these statements, I would love to receive the information.]

Their son William Avery Bishop became famous for his accomplishments during World War I.

During the First World War, he was the most decorated Canadian.

Billy Bishop's childhood home is a national historic site and can be visited to learn about him and others who fought in the First and Second World War.

William Avery Bishop was born 8 February 1894 in Owen Sound to William Avery and Margaret Louise Greene. [1] He received his education in the Owen Sound schools. In 1911, he went to Kingston to attend the Royal Military College [2]

On the 30th of March 1915, William signed up with the Canadian Over-seas Expeditionary force as an officer. He is described on his attestation papers as 5 foot 6 inches of fair complexion with blue eyes and light brown hair. Because he contracted pneumonia, he did not leave Canada with the other members of the Mississauga Horse of Toronto. He went overseas with the 7th Canadian Mounted Rifles. The muddy English training camp was not to his liking and he was able to get transferred to the Royal Flying Corps first as an observer and then later as a pilot. In March 1917, Billy Bishop went to France. [3]

During a leave in Canada, William Avery Bishop married Margaret Eaton Burden on 17 October 1917 in Toronto. [4] He returned overseas where he is said to have shot down 72 enemy planes. He was awarded many medals but the highest honour was the Victoria Cross.

He died at his home in Palm Beach Florida at the age of 62 on 11 September 1956. His funeral service was in Montreal. He is buried in Greenwood Cemetery in Owen Sound. [5] 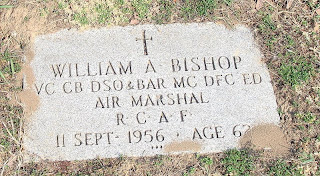 If further research proves that I am not related to him, I will be still proud of what he accomplished for he was an Owen Sound lad and he was a Markham Berczy Settler descendant.

To see a companion article at Graveyard Rabbit of Grey County Ontario read William Avery Bishop.
Some of the sources for the above.

[2] William Arthur Bishop. The Courage of the Early Morning : a son's biography of a famous father. Toronto : McClelland & Stewart p. 15-16