Recently while reading Amy's Genealogy. etc. blog, I learned something I didn't know. She was writing about cenotaphs.


Question: When is a tombstone not a tombstone?
Answer: When it’s a cenotaph.
A cenotaph (literally “empty tomb”) is a memorial for someone who is not buried at that place, either because they are buried someplace else or the body could not be recovered. Sometimes the marker will give you a clue that it is a cenotaph rather than a tombstone.

I always thought a cenotaph was a military memorial to those who died in service of their country. So now when I visit a cemetery, I will now keep watch for other examples of cenotaphs.

Many municipalities in Ontario have cenotaphs to those who died in one or more military conflicts. They are not usually found within a cemetery but they are more likely found near the town centre. 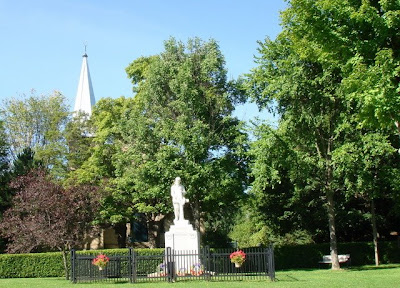 Priceville, Ontario is a small village located on Grey Road 4 east of Durham, Ontario. According to the plaque that stands near the cenotaph in a beautiful park, the cenotaph was erected with donations from Priceville and area residents following the First World War. It was dedicated on October 4, 1921 to "honour those who served and in memory of those who died in that conflict." 127 men from the Priceville area served in the Canadian Expeditionary Force of the First World War and 15 were killed and 60 were wounded. In the Second World War, 82 from the area served and of those, five made the supreme sacrifice. Their names were added to the cenotaph following the war. 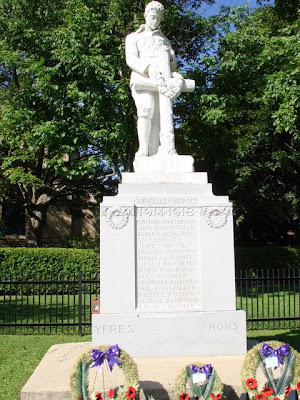 "To all who pause to read this plaque
Remember the sacrifice of those who served so that you could have your freedom."

Read a companion article on cenotaphs at Graveyard Rabbit of Grey County, Ontario where I talked about the cenotaph for Donald E. Stiver.
Posted by Janet Iles at 9:40 AM