Women's History Month salutes Emily Lily Iles nee Dudley. Although, her name was registered as Emily, I have only known her as Lil.
I was fortunate that I spent my early years living across the road from my grandmother. Thanks to photographs that have been kept in the family, I have photographs of her at different stages of her adult life and one from her childhood.

Emily Lily Dudley was born in 1884 in Birmingham, England to Josiah Dudley, a bricklayer and Sarah Mucklow. She came from a family where only four children lived into adulthood. Family lore says that Lil's mother had 22 children, which included 3 sets of twins and 2 sets of triplets. This has not been substantiated. So far, I have found only one other birth in 1869. There is a gap from 1875 to 1884 so quite possibly there were other children. 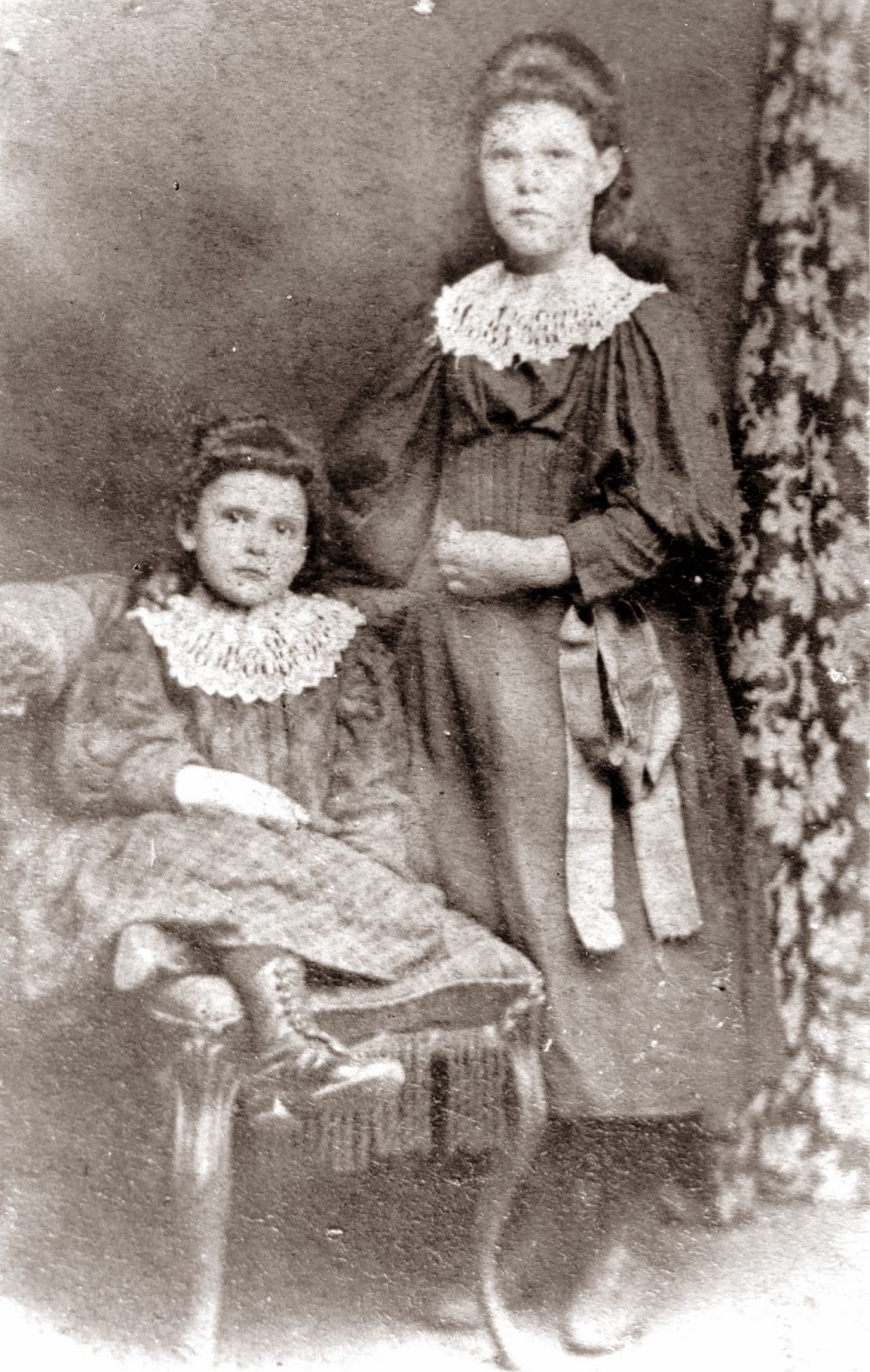 The picture to the left is of Rose, her younger sister and Lil.


In 1901, Lil's father died. At the time of Lil's marriage, the family lived at 2 Back 6 Little Green Lane in the Aston area of Birmingham. (Small Heath) Housing was often crowded. To read about Back to Back Housing in Birmingham, check this site.
I suspect that she met her future husband, William Iles at the Small Heath Salvation Army.

Using multi-map with approximate addresses, it would be about a twenty minute walk between their homes.


My grandparents were married in 1903 in the Register office. From the Salvation Army Heritage web site I learnt that


The Salvation Army, were not registered to perform marriages until 1898 (and after that it was up to individual corps to have their halls licensed). Many corps halls were not licensed for marriages until the 1950s or 1960s, or later, so sometimes there would be two ceremonies: the official marriage ceremony at the Register Office and a Salvation Army marriage service at the Army hall. After 1898, the corps building could be used for marriages, with the ceremony conducted by a Salvation Army officer, but with a registrar or 'Authorised Person' present to fulfil the legal requirements. 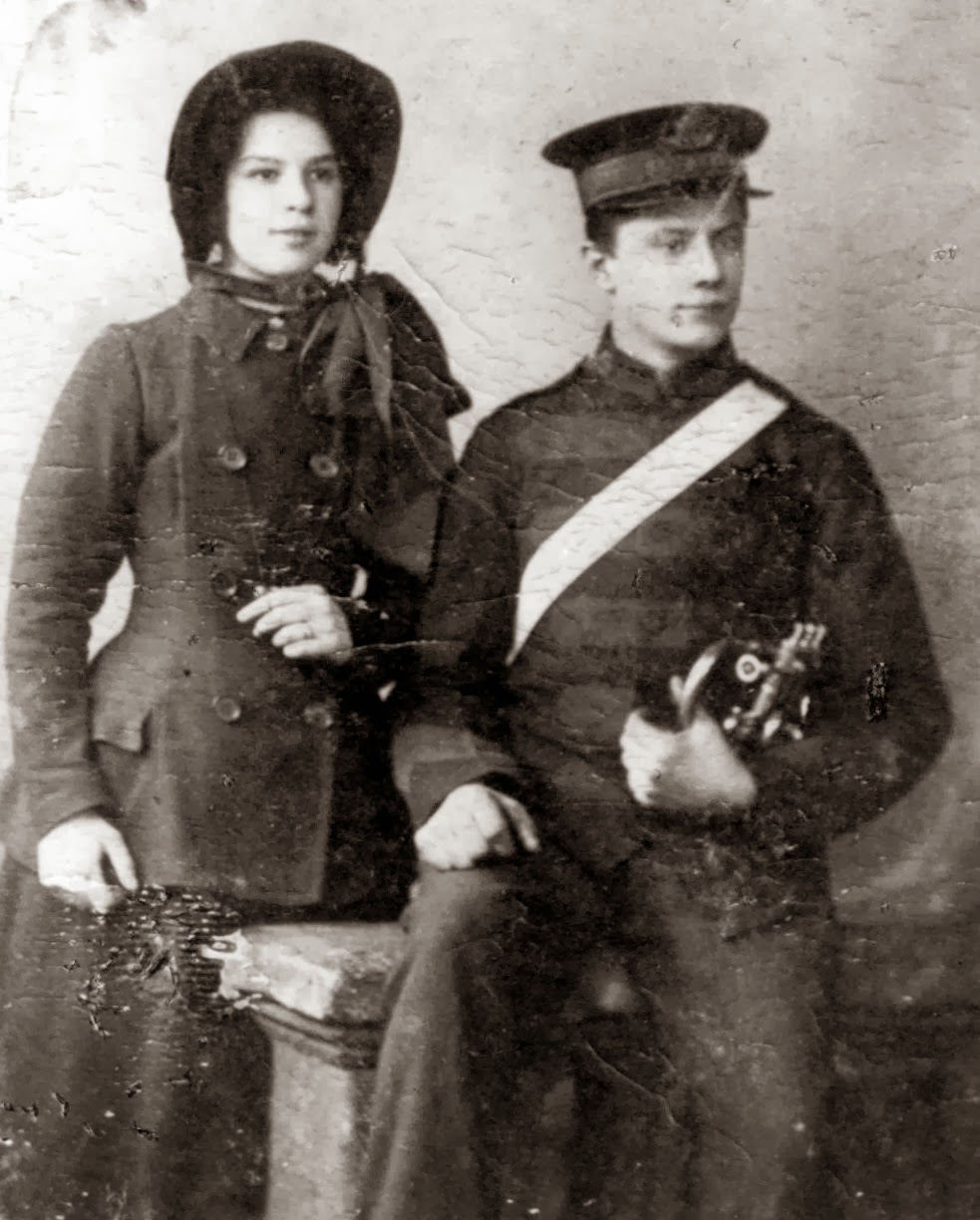 The photograph to the left may be from around the time of their marriage.


Lily came to Canada in 1905 with her husband and baby girl, May. Also on board were William's mother and siblings. Her father-in-law may have emigrated the year before. Her older brothers had already emigrated to the United States. She left behind her sister, Rose and her mother, Sarah in England.


The 1911 census shows the two Iles families living outside Owen Sound. What a contrast after living in the crowded city of Birmingham. The family moved into Owen Sound, a small town, and Lil lived there the rest of her life.

Lily was a member of the Salvation Army until her death, but her husband and some of the boys left the Salvation Army to join the United Church of Canada. I have been told that she played the timbrel (similar to a tambourine) and was active in the Home League.

Lil was mother to nine who lived to adulthood: three daughters and six sons. One son and one daughter are still living. During the First World War, her husband was overseas for three and a half years. I understand that he went overseas in March 1916, the month in which my father was born. I wonder if he was home for my dad's birth. It must have been hard for her while grandpa was gone. She kept the postcards that he sent her.

During the Second World War, five of her sons served. Fortunately, all returned home.

Grandma knit baby sets and sweaters for her young grandchildren. She was grandma to over thirty grand-children. I recall a time when she asked me to try on a sweater. She wanted me to check how it fit on me as she was making it for one of my cousins who was about my size. It turns out it was to be my sweater. I don't remember anything about the sweater. When she got older and her vision was getting poorer, grandpa wrote out the patterns on cardboard to make it easier for her to follow.
This photograph is of my sister, Nancy and I. I don't look very happy. I have never been fond of having my photo taken.
She and William celebrated their sixtieth wedding anniversary with a family dinner. In attendance were her six sons and three daughters, twenty-eight grandchildren and thirty-three great grandchildren.

In her later years, she became quite frail, but she still had the sparkle in her eyes. The photograph below was taken at Niagara Falls. It would be quite an outing for her. 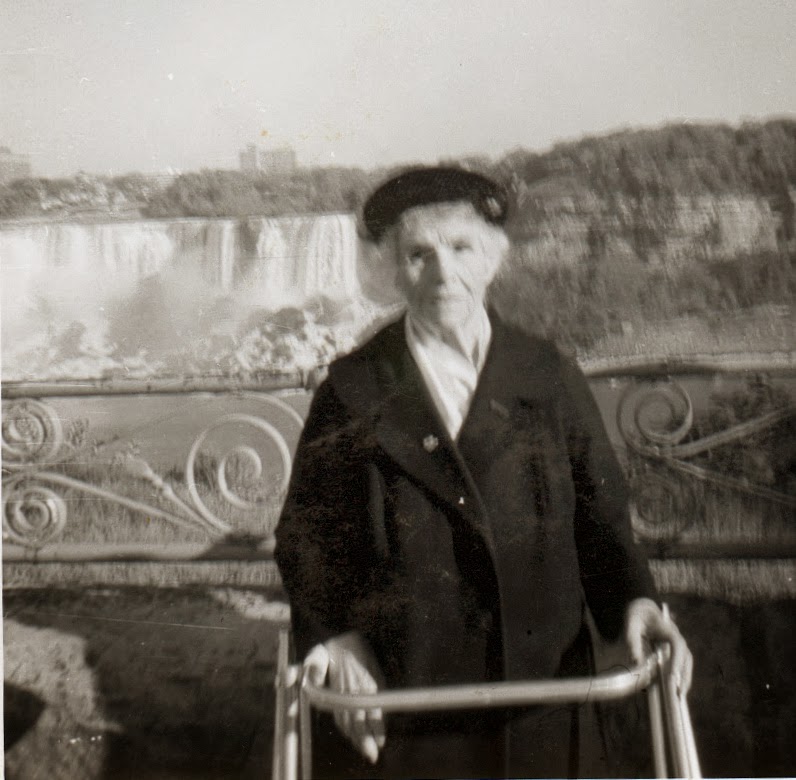 Now that I am interested in our family history, I wish had asked her more questions. I would love to know more about her life and her family.
Posted by Janet Iles at 7:17 PM